III. Water law: Fallacious and sympathetic to polluters [2mn38s on the youtube video] 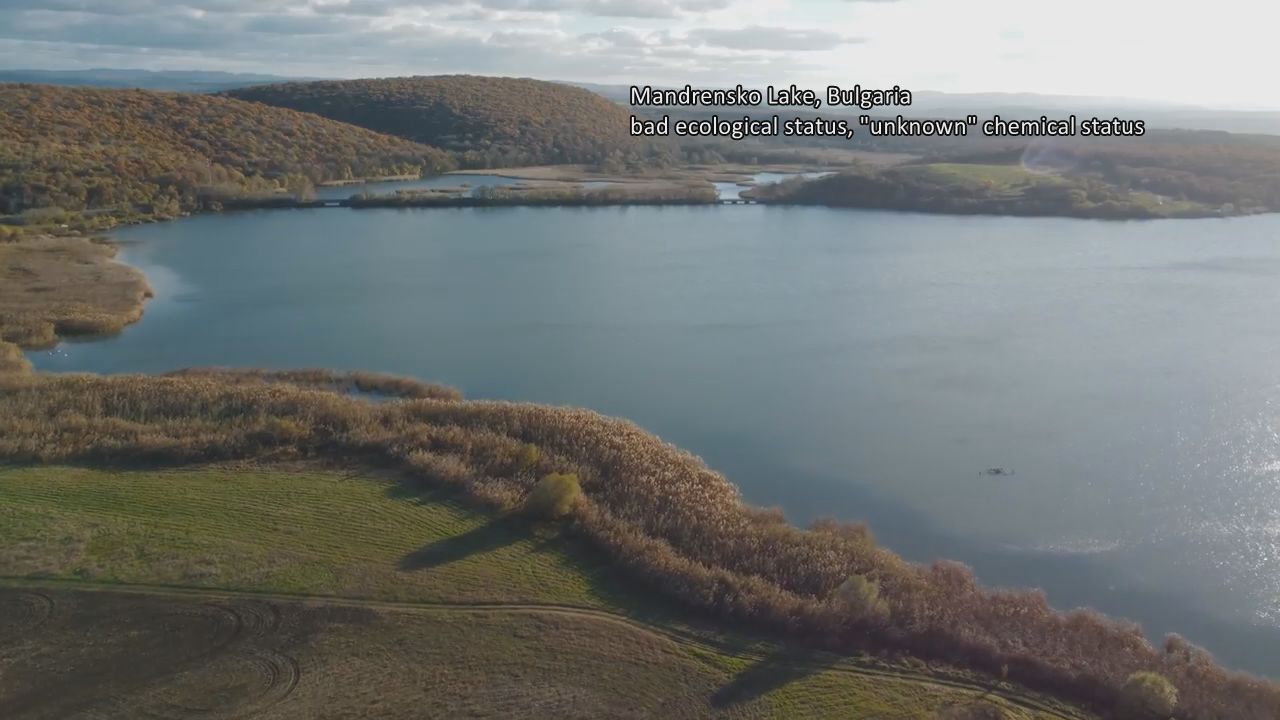 ACCORDING TO FRENCH MINISTER OF THE ENVIRONMENT Barbara Pompili, “the [2020-2021] recovery plan [to mitigate the economic and social impacts of the covid crisis], has to be used as a leverage to speed up the restoration of water quality”. The recovery plan’s name is France recovers. For water, France recovers means: €300 million for sanitation and drinking water (that is 12 percent of the 2016-21 sanitation budget for the Artois-Picardie river basin district in northern France); €50 million for organic farming (= 0.7 percent of annual subsidies for French conventional farming) ; €50 million to “plant hedges”; fish passages on the Rhine river. Meanwhile, in 2020, the French government spent €7 billion to save a single and highly polluting airline: Air France. In the vast majority of the French landbase, more than 60 percent of surface water bodies do not reach good status (Insee, 2021 [a]; Le Figaro, 2020; Ministère de la transition écologique, 2021 [a]; Préfet coordonnateur Artois-Picardie, 2015 [a], p.6)

To sum up the overall water quality in the European Union (EU) detailed in Part 2, most EU water bodies are in a sad state: more than 60 percent of surface water bodies do not reach good status; the chemical status is grossly overestimated; emerging pollutant are ubiquitous; thousands of watersheds have been transfigured by development; the list of problems, small and big, goes on and on.

Despite all of this, the EU has just decided not to revise its 2000 Water framework directive (WFD). This directive is the most important law about water quality across Europe. The purpose of the WFD “is to establish a framework for the protection of inland surface waters, transitional waters, coastal waters and groundwater”. The text of the WFD states that it could be revised by 2020. In late 2019, European legislators decided that a revision of the WFD was not worth it (EP and CEU, 2000, article 1).

Before looking into the arguments of EU legislators to leave the 2000 Water framework directive unchanged, let’s scrutinize this particular directive. The goal of this directive and a few other related European laws is to protect water:

According to the WFD, EU member states have to control and register the entry of pollutants into water bodies. They have to take measures “in order to avoid compromising the achievement of the objectives” of good status (or potential) of water bodies by 2027. These measures are written in the program of measures of each river basin district like the Artois-Picardie district in northern France (EP and CEU, 2000, articles 1, 4 et 11).

The water directors of the EU could even make it easier for States to neglect their water bodies. These water directors are charged with the enforcement strategy of the WFD. They recently suggested that the objective of good status should be postponed after 2027. Article 4.4 of the WFD does not set any deadline to reach good status (EP and CEU, 2000, article 4; Water directors, 2017, p.5-8; Waters directors’ meeting, 2018, p.5).

The European commission likes to praise its law. In its appraisal of December 2019, the commission begins by boasting about how “successful” the WFD has been “in slowing down the deterioration of water status and reducing chemical pollution”. And yes, it is true that the deterioration of water status has been slowing down in a lot of cases. However, this slower deterioration has also not been true for many other watersheds over the last few years. Thus, about a quarter of all EU surface water bodies’ water quality elements (e.g., fish, plancton, plants) deteriorated between 2012 and 2018. For these specific water bodies for instance, in many cases, noone can determine whether or not the pace of deterioration of water quality elements slowed down compared with the 2000s (European commission, 2019 [a]; EEA, 2020 [a]).

Beyond that, how can you decently talk about the “success” of the WFD when deterioration has merely slowed down or when there is a status-quo below good status for tens of thousands of water bodies? Indeed, this kind of slower deterioration or status-quo remains detrimental to water bodies. How can you talk about “success” when more than 60 percent of surface water bodies do not reach good chemical and ecological status? How can you talk about “success” when the EU does not try to know the real chemical status of water bodies and when the EU knowingly ignores the impacts of thousands of pollutants and their mixing? All of that twenty years after the WFD was passed…

In its 2019 appraisal of the WFD, the European commission also addresses unresolved issues. Generally speaking, the commission does not blame EU law for these unresolved issues. According to the European commission, “if the WFD’s objectives have not been reached fully yet” [please notice the euphemism], it “is not due to a deficiency in the legislation”. According to the commission, if objectives have not been reached, it is in part because of:

The European commission proves itself to be dishonest when it raises two other issues: the “slow implementation” of the WFD and the “insufficient integration of environmental objectives in sectoral policies” (e.g., in agriculture, industry, stormwater management). The commission purposely deflects the issue. The real issue lies in the objectives of the WFD which are inconsistent with good status for tens of thousands of water bodies across the EU (EP and CEU, 2000; European commission, 2019 [a]).

Let’s have a closer look at discrepancies between the objectives of the WFD and good status for water bodies. First of all and for the vast majority of water bodies, the WFD gives EU member States very little incentives to reach good status by 2027. Again, the objective of good status is merely an objective and nothing else. The most flagrant discrepancy between objectives and good status has to do with chemical status. Even though the European commission claims that “there is room to achieve better results on chemicals”, it does not deal with the real problem. The issue of the extremely low number of chemicals taken into account to assess the chemical status is left unresolved by the European commission. And that leads to the extreme overestimation of this chemical status (EP and CEU, 2000; European commission, 2019 [a]).

The European commission ignores another major mismatch between the objectives of the WFD and the good status of water bodies: it leaves article 4.5 of the WFD unchanged, which allows EU member States to let water bodies stagnate below good status through generous terms (see III.1). An additional mismatch between objectives and good status pervades EU’s water law. That law lets States impose inconsequential fines on industrial, agricultural and other polluters. I’ll discuss this in detail later (EP and CEU, 2000; European commission, 2019 [a]).

Additionally, the European commission uses fraudulent arguments to justify its refusal to change the WFD. The commission declares that “good status of water bodies also critically depends on the full implementation of other pieces of EU legislation, such as the Nitrates Directive and the Urban Waste Water Treatment Directive”. Yet, the implementation of these two directives among others, including the WFD, does not guarantee in any way good status. Indeed, legal obligations in these two directives are not strict enough and do not prevent the discharge of vast quantities of polluting substances in water bodies. I’ll examine the issues of waste water treatment and nitrates later on (EP and CEU, 2000; European commission, 2019 [a]).

It is worth dwelling a little on pharmaceuticals and, more broadly, on the disregard for the impact of mixtures of chemicals on water bodies. On this matter, some scientific studies, published before the European commission’s decision not to change the WFD, are revealing.

In 2019, nine scientists suggested changes in the WFD. These ones among others in the scientific community would like this directive to take into account the impact of mixtures of chemicals on the chemical and ecological statuses of water bodies. According to their research, the WFD cannot reach its stated goals without taking this impact into account. Their 2019 article is about the risk assessment of mixtures of hundreds of different pollutants. Areas in the Danube and Rhine river basins as well as other watersheds in Spain have been studied. The tiered assessment is based on modelled concentrations of pollutants in water. In a slew of river segments, the assessment revealed a chronic harmful impact of many pollutants on algal and daphnid communities. It should be noted that these pollutants are not used for the official and legal assessment of chemical and ecological statuses. In Spain and in the central part of the Danube river basin, the risk assessment concluded that water consumption directly from the river is not recommended. In Sweden, according to another study on the cumulative impact of 54 pharmaceuticals, 17 were found in concentrations exceeding 10 nanograms/l in the Stockholm area (Brack et al., 2019; Cousins et al., 2017).

Despite this kind of studies, the EU rejects ideas to change its directives in order to significantly reduce the impacts of mixtures of chemicals on water quality. According to a group of several dozen scientists called SOLUTIONS, based in Germany and funded by the EU itself, the EU pays « little attention to mitigation options » of pharmaceuticals found in water (Solutions, 2021)

From the deep artifilization of water bodies to the chronic lack of biodiversity in tens of thousands of water bodies, from the mismanaged impacts of urban overpopulation to the acute deficiencies in the regulation of agriculture, from the deceptive assessment of chemical status to the deeply flawed legislations connected to the WFD, all the needed works abandoned or neglected by the European commission have far-reaching consequences on water. In the end, without stating it clearly, the commission gives little consideration to the sad status of most European water bodies. When it claims that “the Water Framework Directive is sufficiently prescriptive with regard to the pressures to be addressed”, the European commission demonstrates both its complacency and outright dishonesty (EP and CEU, 2000; European commission, 2019 [a]).

Waters directors’ meeting, 2018. The Future of the Water Framework Directive (WFD)– Water Directors input to the fitness check process on experiences and challenges of WFD’s implementation and options for the way forward. Webpage viewed on 3/14/2022

1) In the WFD, “reasonably” unavoidable human impacts are described as “impacts that could not reasonably have been avoided due to the nature of the human activity or pollution” (EP and CEU, 2000, article 4).