FIRST, VARIOUS POLITICAL ENTITIES WITHIN A RIVER BASIN DISTRICT WOULD BE CREATED. A river basin district means « the area of land and sea, made up of one or more neighboring river basins together with their associated groundwater and coastal waters ». Currently in the European Union, the river basin district is « identified as the main unit for management of river basins » (European parliament and council of the EU, 2000, article 2). 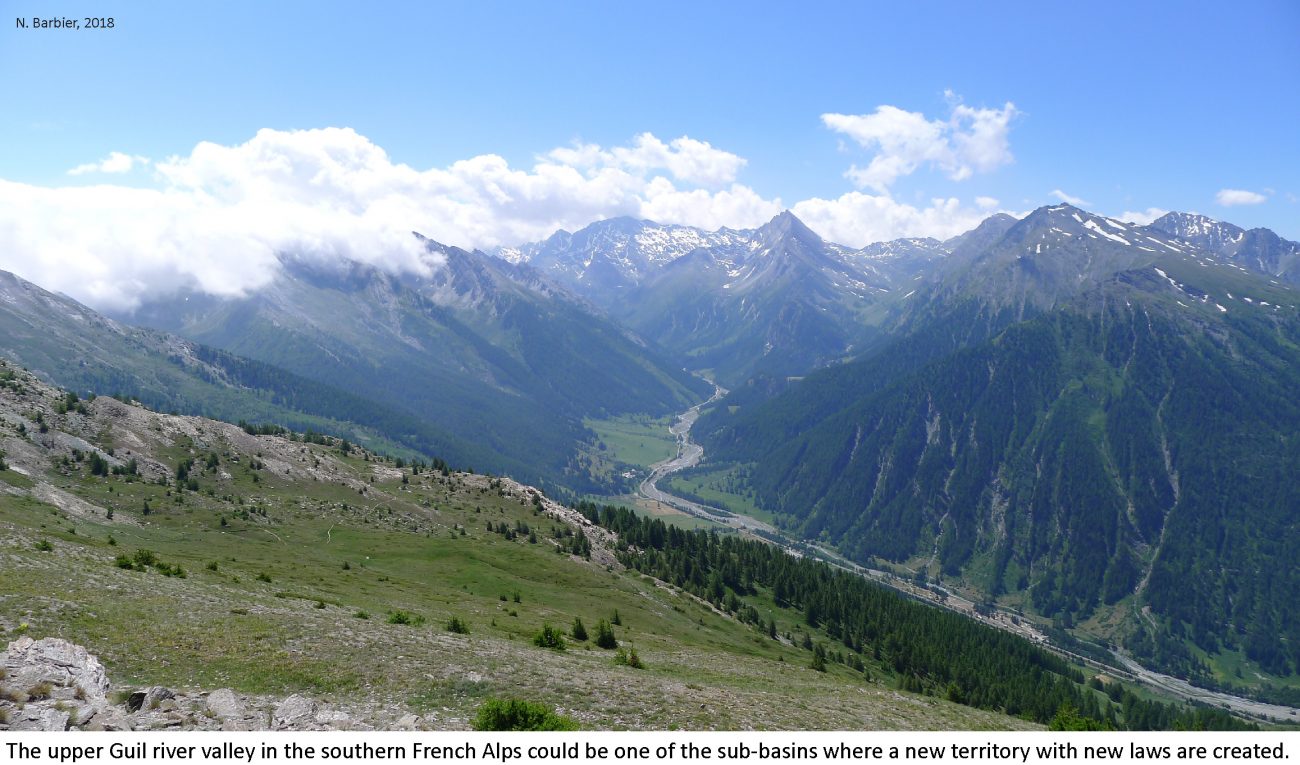 Each newly created political entity would be based on a specific legal, philosophical and political system that its members would define. A given system would then be applied on a specific area inside the district. How would this work? The said district would be subdivided into sub-basins whose size and natural resources would be roughly proportional to the percentage of votes obtained by each political entity within the district. One or more existing watersheds (depending on their size and natural resources) would form the territory of each entity. Such a territorial reorganization would probably require to limit the number of political entities to ten or so. It would take decades for people to get together in these new territories in accordance with their choice and for these sub-basins to become fully functional.

Before that, a transitional political process could be put in place. During this period, the political entities would take time to define their own laws dealing with working conditions, entrepreneurship, wages, the banking system, real estate prices, environmental protection, etc.

Individuals, families or groups could get involved in preparatory projects. One of them could target the purchase of affordable agricultural lands. The goal would not have to be full-time farming. Instead, people could try to multiply small organic fruit and vegetable gardens, small-scale livestock operations and restore wild ecosystems here and there. In 2016 in France, the average price of one square meter of farmland was 0,60 euro. It was 0,40 euro for woodland. With permaculture, a garden of just 100 square meters can produce more than 500 kilograms of fruit and vegetables per year. The more efficiently people organize at the local level with a spirit of fairness and solidarity, the better and quicker the results. This project first requires to identify willing sellers among landowners, including municipalities. People would meet with frustrating refusals from landowners. But patience and tact could work over time. This type of land project is all the more arduous that it is better to purchase parcels as close to each other as possible. In this case, geographic proximity fosters both environmental protection and solidarity. This endeavor could be a good start for people who want to build new territories based on genuine economic fairness and respect for the environment (Gouin, 2016; LE-PRIX-des-terres.fr, 2017 [a] and [b]).

Going back to my idea of elections on a district-wide scale, these lands purchased by people would make up a part of certain political entities’ territories after the elections. More generally, what happens once political entities get their territories following the transition and vote? Some current laws could remain in effect, whether they be about health care, social security, public transportation, children’s rights or other legal matters. New laws on a sub-basin-wide scale would eliminate many economic, environmental and social conflicts or deadlocks due to myriads of current laws people can’t stand anymore or feel disgusted with. The different political groups living in different sub-basins could live side by side peacefully. The rates of in-migration and out-migration in the various sub-basins would probably vary widely according to the local policies and prevalent opinions on this matter.

Most current pollutions, economic and social injustices could disappear in certain sub-basins if the following conditions are met :

This kind of territory would not inhibit the diversity of identities which largely stems from other forms of diversity: that of ecosystems and their components, of regional productions, of art and craftsmanship, of architecture and landscaping, of an infinity of cultural subtleties.

It is neither utopia nor daydream. We have got everything we need to get there, starting with our patience, consistency and above all our intelligence that we need to respect without fearing where it leads us and let it flow freely.

Note: This article is also part of the conclusion of my investigation entitled The European union of water polluters (11/2017)