France in the Sahel: Ready for a war (for uranium and against migrants) (8/2019)

FRENCH RESEARCHERS FROM THE IRIS INSTITUTE contemplate a uranium war in a 2018 study sponsored by the French government. Those researchers are warmongers, masked as fake intellectuals. They are very well paid by the French government. By publishing that type of almost confidential study for « experts », they demonstrate that they belong to another class of soldiers, always hidden behind their publications. They do not take any risk, but they gladly take governmental funds. Their love for this sort of funding and the way in which they legitimize the French addiction to uranium far outpace any sort of minimal respect for people living in the Sahel. 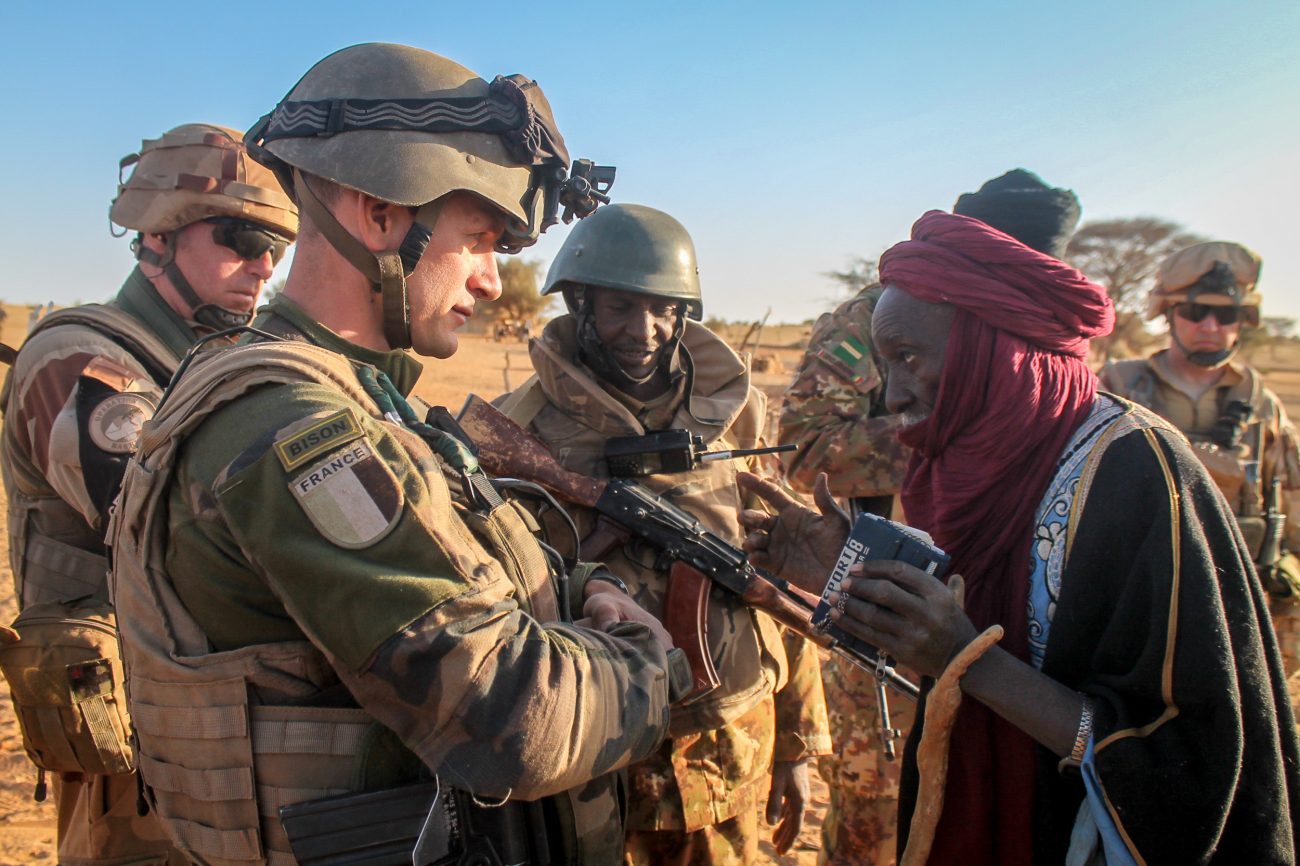 Before focusing on the study published by the IRIS institute, it is necessary to address the whole issue of the French presence in the Sahel. French troops are present in eight western African countries (Burkina-Faso, Chad, Gabon, the Ivory Coast, Mali, Mauritania, Niger and Senegal) as well as Djibouti in eastern Africa (Ministère des armées, 2019 [a]).

The French State strives to disconnect the presence of French troops in Africa from both the « refugee crisis » and French economic interests there. The French army is currently conducting opération Barkhane in five Sahel countries (Burkina-Faso, Chad, Mali, Mauritania and Niger) with 4,500 French troops on the ground, 7 fighter planes, 22 helicopters, 3 drones, 6-10 military transport planes, and 460 armored vehicles. The French army has been deployed to « combat terrorism » in cooperation with national armed forces in Sahel (Ministère des arméees, 2019 [b]).

Even the European Union (EU) is financially taking part in this effort with 50 million euros allocated to the five Sahel countries, called G5 Sahel, for 2017 and 2018. Interestingly, these EU funds have to be used to « combat illegal migration » at the same time (European commission, 2017 [b]; Ministère des arméees, 2019 [b]). 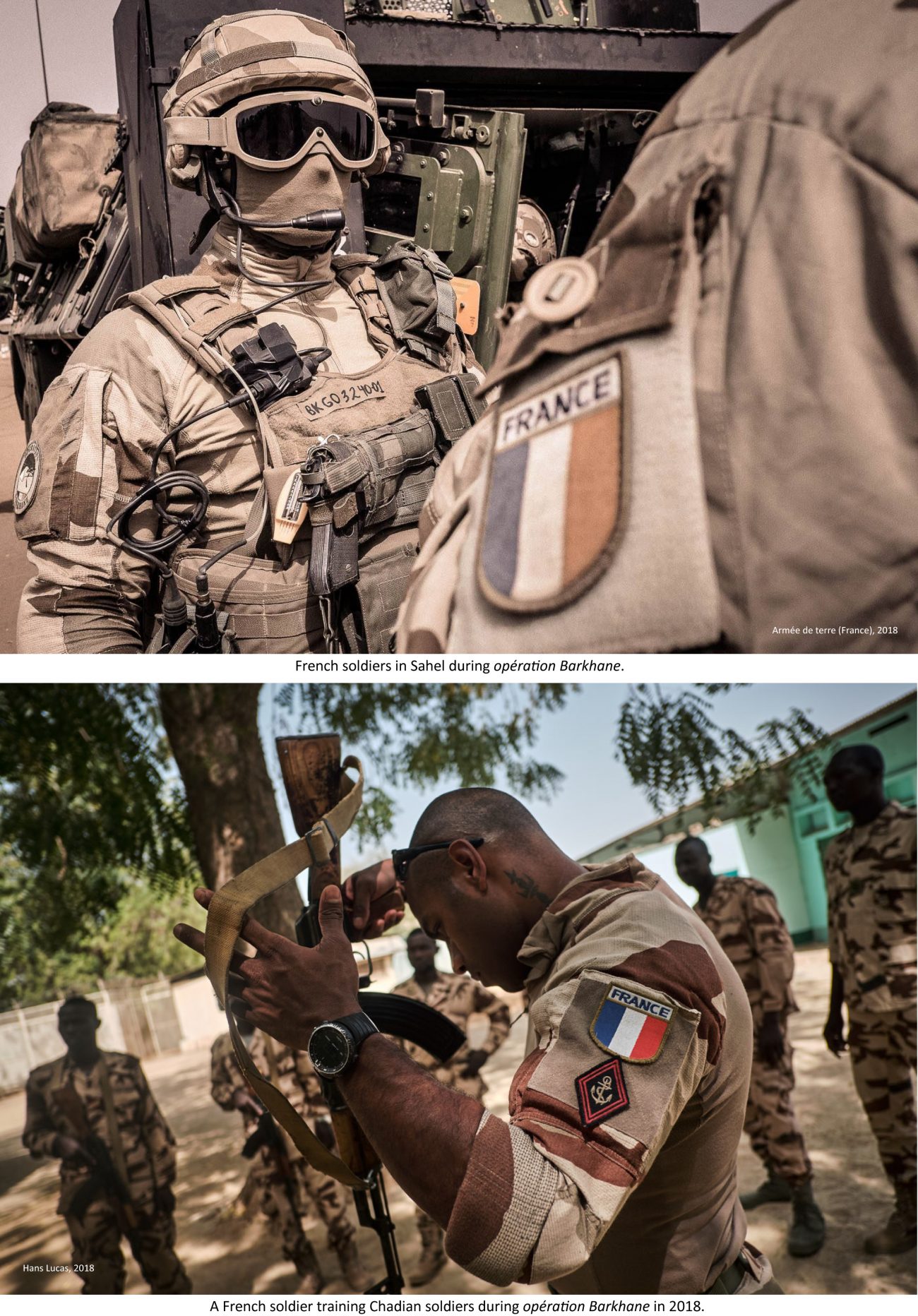 In 2017, a resolution of the United Nations security council submitted by France mentioned the need « to counter the activities of terrorist groups and other organized criminal groups » in the Sahel region. This presents two problems:

One thing is certain: if France is intent on defeating terrorists in the region, it is not deploying so many soldiers and equipment and spending so much money merely because the G5 Sahel called for their involvement.

A study requested and sponsored by the French ministry of the armies (ministère des armées) contemplates the possibility of a much greater French military presence in the Sahel. It was published in 2018 by a group of high profile French researchers from the Observatory of Climate Change Impacts on Defense and Security (IRIS institute) who regularly work at the request of the French government (IRIS, 2018, p.45-47).

These researchers envision a scenario that, in some regards, looks like a French version of the invasion of Iraq by the United States in 2003. Their scenario has everything to do with a national addiction to nuclear energy that produces three quarters of France’s electricity. A large portion of this nuclear energy is fueled by uranium mined in Niger by the Orano French company (formerly known as Areva) (Destrijcker and Diouara, 2017; IRIS, 2018, p.45-47; L’Elémentarium, 2019; Orano, 2019)

The researchers’ scenario takes place in 2035. Sandstorms caused by drought would spread radioactive dust from two vast uranium deposits (Cominak and Somaïr) in northcentral Niger, mined and majority owned by Orano (which plans to mine a third deposit in the region). As a result of the spreading of radioactive dust, regional water resources would be contaminated, and a lot of livestock as well as people would die. These disasters would cause so much harm to a large population of Tuareg nomads that they would attack both the mines and governmental buildings. France would send doctors, build a hospital and pay for the « clean-up » of polluted areas. The last-mentioned commitment does not make sense: how do you clean up pollution due to radioactive dust that could cover thousands of square miles (IRIS, 2018, p.45-47; Orano, 2019)? 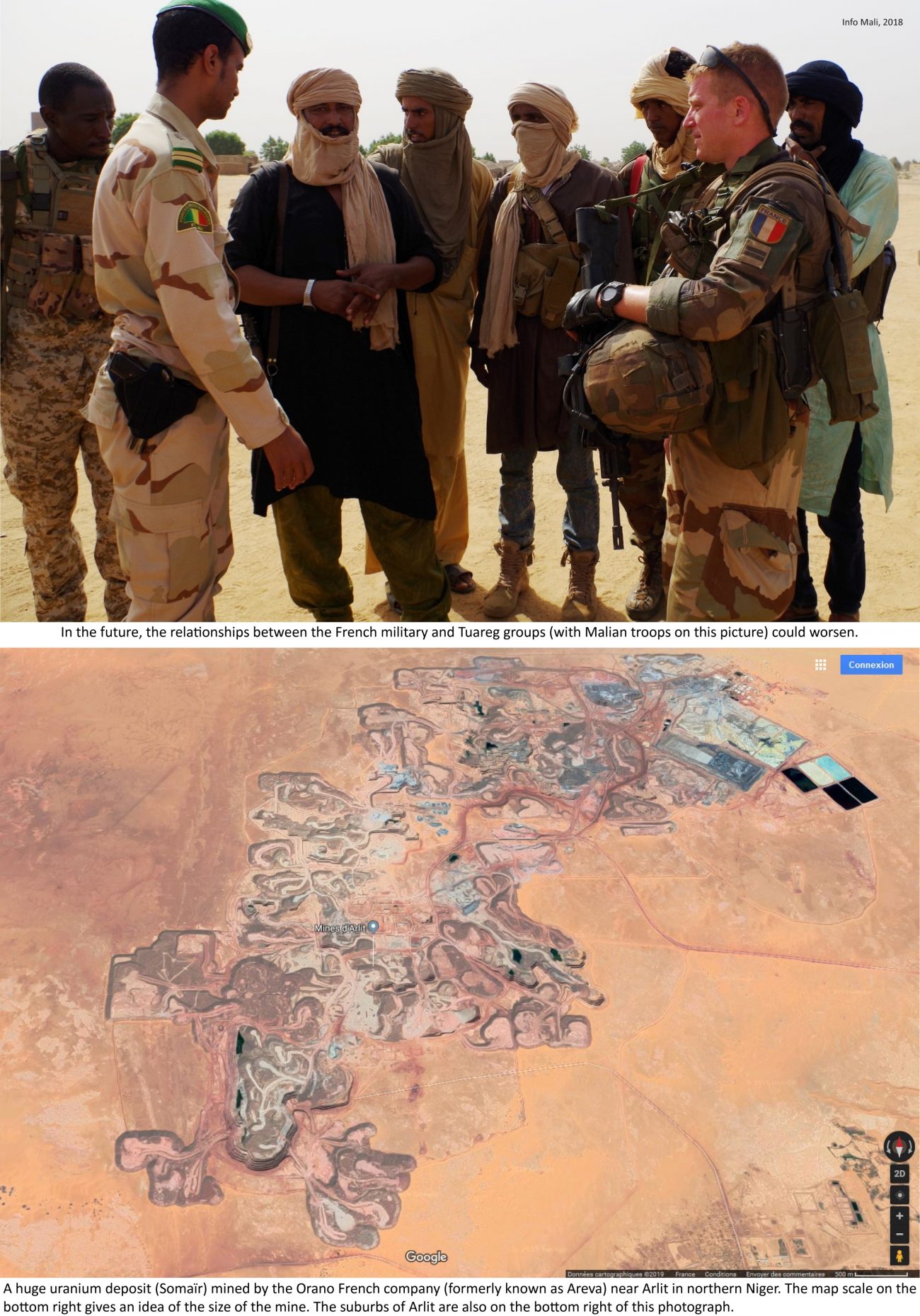 The researchers’ scenario does not stop at that nonsense. French colonization 2.0 is also part of the program. Under their grim scenario, attacks by Tuaregs would trigger a French military crackdown. The country would deploy as many French troops as is necessary to secure the uranium mines for an indefinite period of time. It would pressure Niger’s government to follow suit. This war would require a far bigger military force than the French special forces sent by socialist president François Hollande in 2013 to protect these mines following the taking of French hostages by a local armed group (Guisnel, 2013; IRIS, 2018, p.45-47).

Radioactive dust has already spread from Orano’s mines and made local people sick. This is the subject of Amina Weira’s 2016 documentary film entitled La colère dans le vent. The extent of this current disaster is just not as massive and sudden as the one envisioned by the researchers from the IRIS institute (Weira, 2016).

Depending on the size of the affected area, the spreading of radioactive dust could prompt tens of thousands of people to migrate. If so, would they crowd into our cities’ impoverished neighborhoods?

Meanwhile, if too many French soldiers die in the Sahel, France may withdraw most of its troops. In this case, France could again send only small contingents of special forces to secure the uranium among other possible missions. Or it could replace Niger’s uranium with more of that metal from Kazakhstan and Canada. Or France could ask the European Union and other European countries to get involved militarilly in the Sahel in order to prevent more migrants from coming to Europe. And shed more African blood in the process.

Destrijcker L. and Diouara M., 2017. A forgotten community: The little town in Niger keeping the lights on in France. African Arguments. 5/7/2019.