Cars, sheep and large landowners: winning trio in the Hautes-Alpes (before hangover)

In the Hautes-Alpes in southern France as in other parts of the world, one can always focus on environmental and social accomplishments: the adequate protection of certain wildlife species; the welcoming of foreign migrants within organized groups and families; the efforts made by small farmers and consumers to sustain organic farming; the collection and treatment of compost at the municipal level; etc. But the scope of these accomplishments remains limited. They are never part of a lifestyle that could be considered truly balanced from economic and environmental standpoints. We don’t need to impose this lifestyle on others, but we need to be able to lead it without obstacles put in our way by hateful opponents. Prevailing trends, namely the immense social inequity rooted in our economic and legal systems and environmental mismanagement, stand in our way. In order to liberate people who want it from these scourges, we have to identify and explain them as clearly as possible. It helps us minimize cooperation with the insane established order and implement solutions consistent with both our needs as human beings and the needs of our environment. These are the two goals of this series of articles on the Hautes-Alpes.

3. The lowness of large landowners on top of the Hautes-Alpes (courtesy of French legislators) 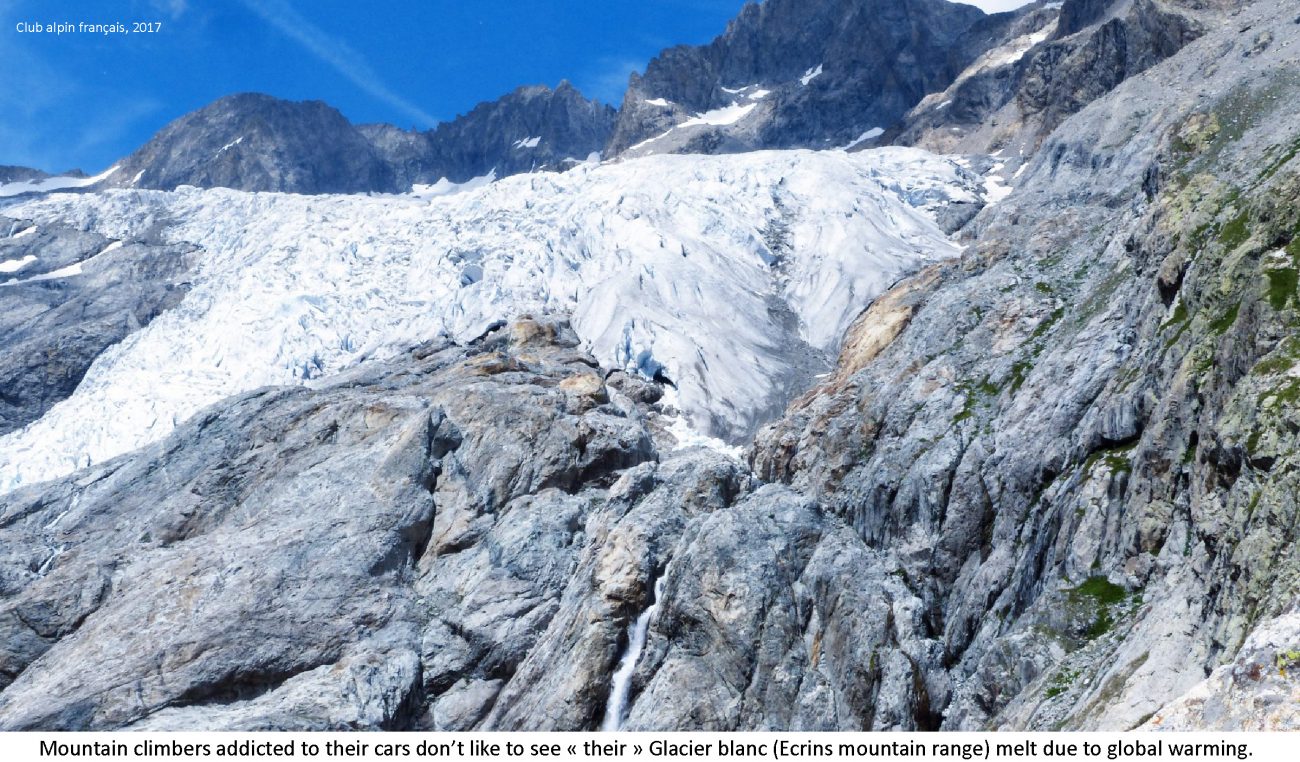 LET’S PONDER A LITTLE OVER SOME CONTRADICTIONS OF « HUMAN NATURE ». The ones I focus on are quite widespread here in the Hautes-Alpes département. A good number of Haut-Alpins (people living in the Hautes-Alpes) complain about global warming. Too often, it disrupts their ski season. It overheats their favored outdoor climbing walls and gives them sunstrokes on their most cherished hiking trails 2,000 meters high and above in the summer.

A lot of regional mountain dwellers are immoderate car drivers fueling global warming while hating air pollution. Up high in their mountains, they can feel far away from unbreathable cities. The Haut-Alpins in good shape who prefer cars to public transportation comprise a large segment of the regional population. They have several reasons to feel almost in love with their cars. One reason frequently stands out: driving makes it easier to make the most of their favorite recreational sites wherever and whenever they want to. Around here, this easy access by car is clearly one of their motorized priorities.

Nowadays, driving in order to go skiing on artificial snow is becoming increasingly common. No matter how warm winter temperatures become in the future, more and more ski resorts guarantee snowy ski trails all winter long (photos 1). Resorts’ owners and managers have done so by investing tons of money in pricy snowmaking machines that cover a big chunk of their downhill skiing area with « white powder ». The long-term availability of the water resources used to make snow is not a real concern for these managers. Yet, in areas like the one around Gap (the capital city of the Hautes-Alpes), it is getting increasingly harder to ensure that irrigated farmland and instream flows have sufficient water supply. The ski resorts’ managers have come up with a simple solution to their climatic issues approved by both local and national competent authorities: it consists of a combination of fake snow, overexploitation and misuse of water resources, plus an upper-class price to go skiing (49,90 euros per day in Serre Chevalier or 39,50 euros in Vars) (Binctin, 2017; Magnier, 2016; Noël, 2017; Serre Chevalier, 2014 and 2017; Stelvio, 2014; TPBM, 2017; Vars la Forêt Blanche, 2017). 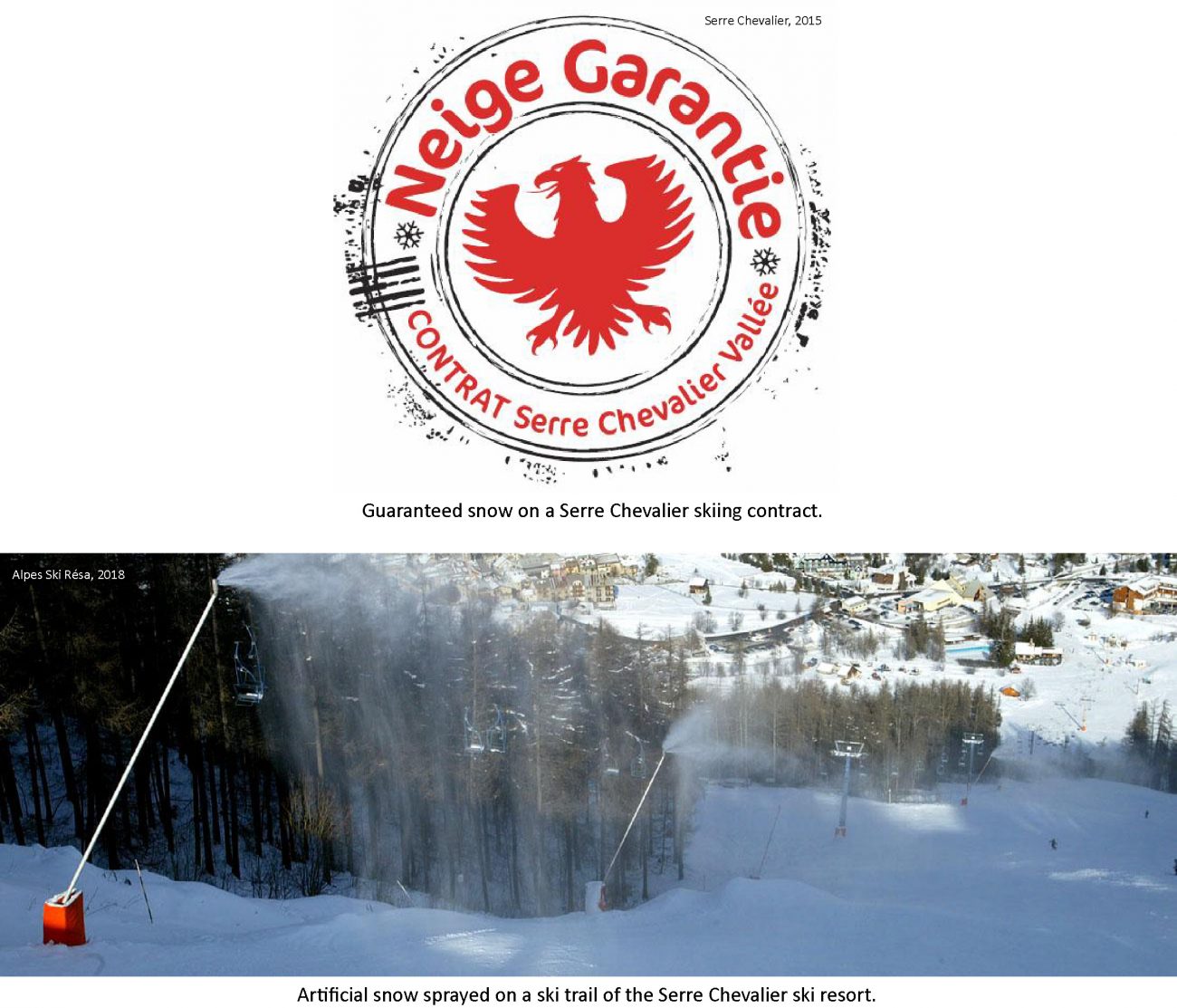 Let’s take off ski boots to go back on the asphalt. Who really needs a car in the Hautes-Alpes? People who suffer from certain handicaps, injuries and diseases as well as pregnant women and elderly people commonly need a car. This is also the case for people whose jobs require an individual vehicle or living in areas not or very poorly serviced by public transportation. But many Hauts-Alpins do not face these physical or geographic obstacles. They are more often than not bursting with energy. Nevertheless, they say that they « can not go without a car » either. People in good physical shape who have a tendency to feel guilty about their addiction to cars may want to avoid reading what follows. Being critical of cars around here is controversial…

By the way, scientifically speaking, there is no doubt that the so-called « virtuous » hybrid or electric cars belong to polluting cars. In order to build their high tech batteries over the coming decades, more and more lithium and cobalt will have to be extracted (about 20 kilograms of lithium for a typical electric car). Lithium and cobalt extraction are particularly harmful to water resources. As much as 1.9 million liters of water is necessary to extract one ton of lithium. This mining activity often takes places where water is by no means abundant (e.g., Argentina, Australia, Chile, China). In Congo, which produces 60 percent of the world’s cobalt, wastewater from cobalt mines contaminates both local water bodies and the soil. If not severely restricted in a near future, cobalt and lithium extraction will affect an increasing number of vast ecosystems (Frankel, 2016; Frankel and Whoriskey, 2016; Gonzalez and de Haan, 2016; Julienne, 2017).

To go to work, Haut-Alpin individuals addicted to their gasoline, hybrid or electric cars overlook public transportation as well. In the Hautes-Alpes’ most significant employment areas, public transportation connecting cities and certain villages plays a role. The Durance valley is the main employment area in this département. It is correctly served by bus and train (photo 2). The regional economy as a whole relies a lot on tourism. Touristic areas hire lots of people. During the summer and winter seasons, these areas also benefit from a decent, although substantially perfectible, bus service. During the summer of 2017, I worked in Queyras in the eastern portion of the Hautes-Alpes. I commuted from Guillestre to Queyras by bus almost on a daily basis. I was generally the only one seasonal worker or one of the very few to take this bus. However, bus schedules in the spring and fall between villages, resorts and the main regional cities are totally inappropriate for a typical day’s work. I am also one of the rare local residents to use the same bus line to go hiking during the summer and cross-country skiing in winter. Most of the time, most passengers are tourists and the seat-occupancy rate is low. Lots of Hauts-Alpins in love with their cars and in good health would rather be glued to their driving seat than take a bus (CCI PACA, 2015; Hautes-Alpes.net, 2018). 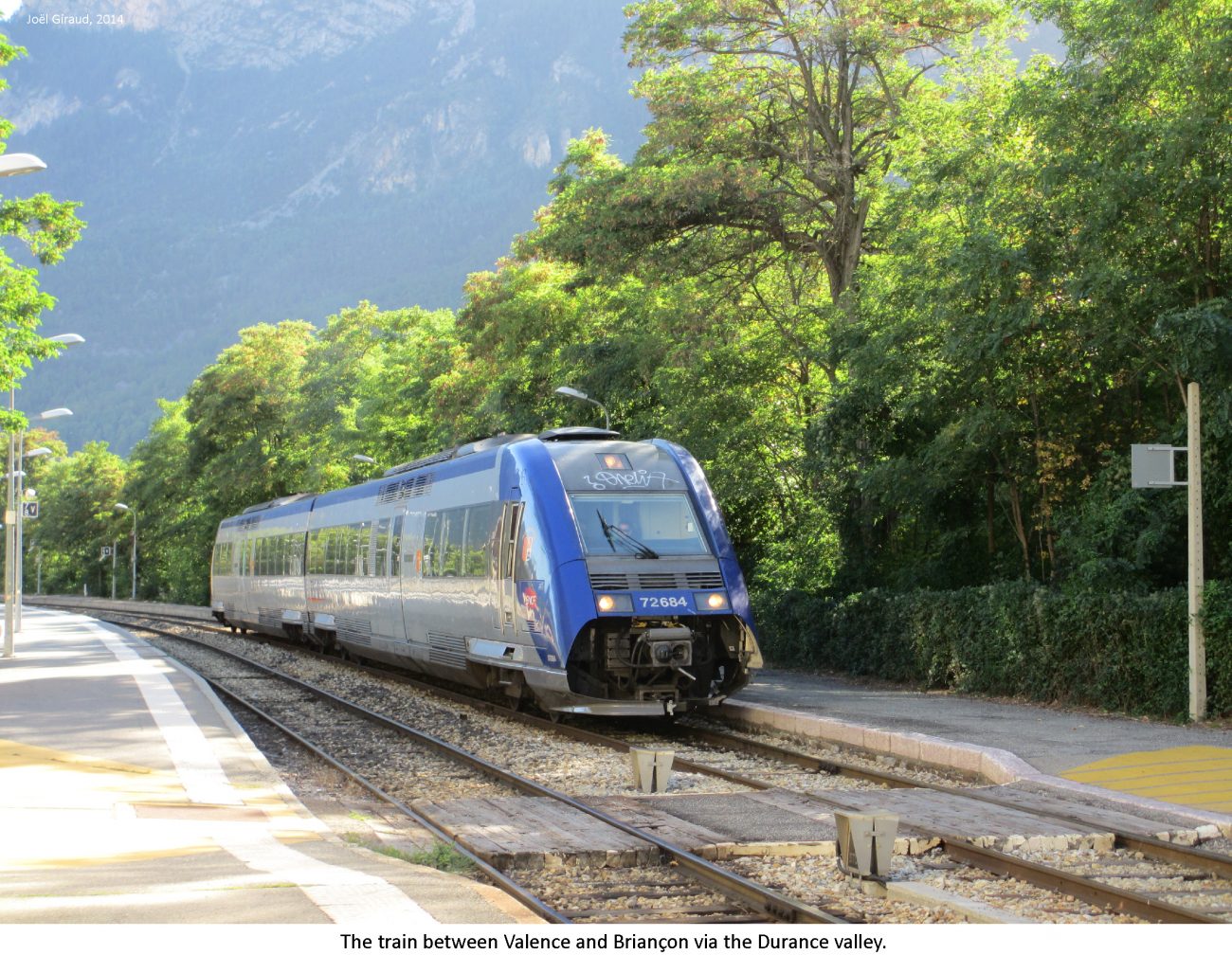 For Haut-Alpin car lovers, fun and comfort put global warming in the background, somewhere in a dusty corner of their brain. This corner reminds them that they reduce the opportunity of a better transit system, but they avoid this topic as an oilman (without cops on his side) avoids water protectors in American Indian treaty areas. On top of our crowds of car lovers, the Hautes-Alpes is faced with a deficient investment in electric public transportation from both local and national governments. Because of this inertia at the individual and governmental levels, there is no regional plan for an electric bus network that would connect cities and villages. Electric buses are now rather efficient and could be powered by a series of small solar power stations like eLLO that will soon open in the mountainous part of southwestern France. Such a transit system would become profitable if most people decided to minimize their use of cars (Boudet, 2017; Breezcar, 2017).

There is another subject-matter that addicted car drivers (photo 3) try to forget. It is about war and pollution abroad. Would they persist if everybody did their best to minimize their use of cars? Perhaps, but with much less damage. By spending lots of money on gas often from Saudi origin (19 percent of French imports of oil), car lovers indirectly fund a super-rich authoritarian regime waging what is almost a genocidal war in Yemen. When oil comes from Nigeria (12 percent of our imports), they indirectly contribute to pollute the Niger delta in a country (Nigeria) where more than 110 million people live in poverty. These are just two of many other problems caused by motorized personal vehicles. Local car drivers in good shape can forget these two irritating issues by eating a fondue made of local cheese and alcohol while discussing the eternal contradictions of « human nature ». After all, their hangover will come later (Amnesty international, 2015; BBC, 2017; Connaissance des énergies, 2017; Vaz, 2017). 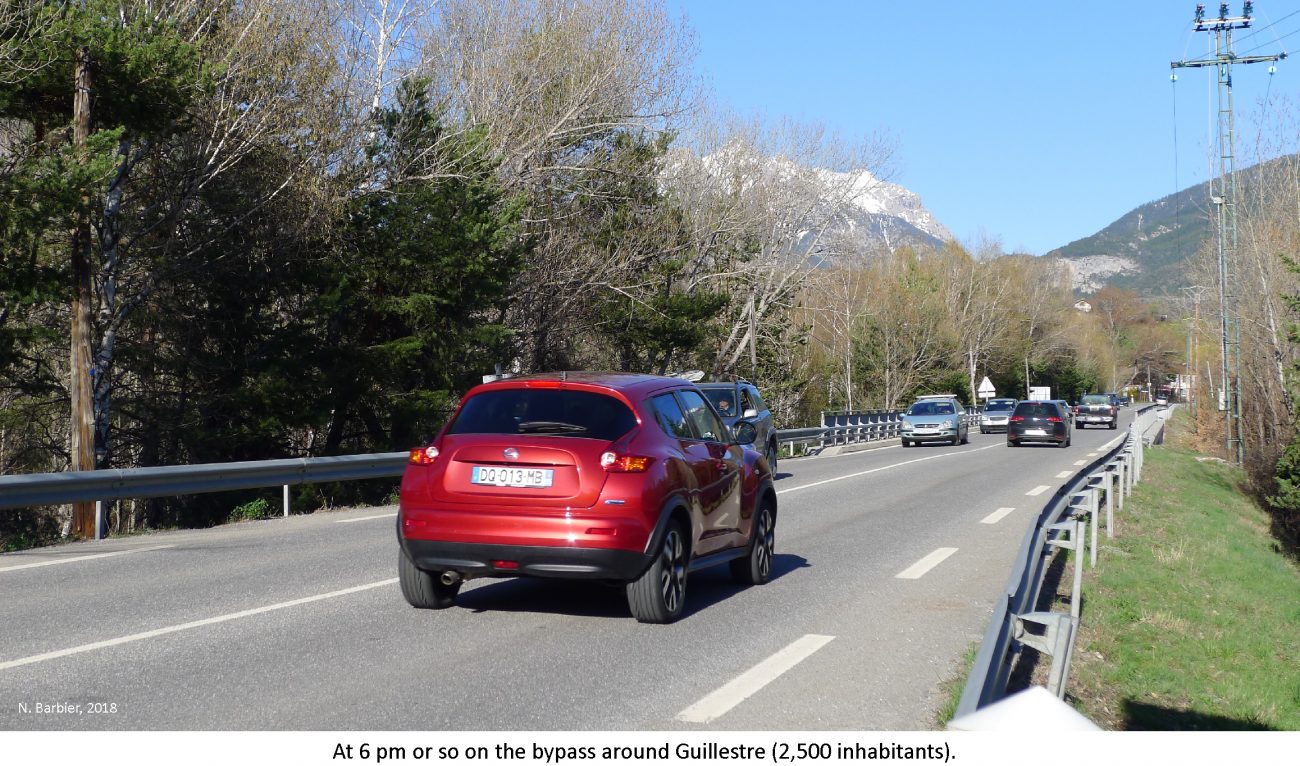